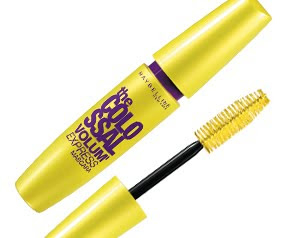 What it claims: Creates 9X the volume, instantly.


To use: Sweep brush upwards from root to tip to plump individual lashes and achieve dramatic volume. Continue building lashes until you reach your desired look. Do not let dry between coats. Repeat for lower lash line. Removes easily with soap and water or Maybelline New York Expert Eyes Eye Makeup Remover Towelettes.

1. The brush: a thick fat specimen with a ton of bristles, it catches even those tiny lashes and helps prevent lash clumping.

2. The clump free formula: Just like define-a-lash, this one features a clump remover in the tube. The formula is good too and goes on clump free. No spider – lashes.

3. No flaking during the day. It stays put! Absolutely water-proof. Even after vigorous rubbing of the eye.

4. It not only volumises, it also lengthens and darkens.  And it also not only holds a curl, it also curls the lashes itself during application.

5. The packaging is a bright yellow, fat tube with purple lettering which is quite easy to locate in a purse. Besides the lettering do not peel off like Define a Lash did.

1. Ok, so it ain’t 9 times the volume. It is more like 3 to 4 times. Plus I am not sure how much truth there is in the collagen deal, as it listed way down the ingredient list. I wonder of there is enough of it to make a difference really.

2. Some people complain about the smell of the formula when wet. I can’t smell nothing on it. Have no such issues.

3. Slightly difficult to take off. It won’t really come off with soap and water. I suggest applying the remover on top of the lashes and letting it dissolve the mascara for a few seconds before wiping it off. It will come off much more easily.

5. You only get one color – Glam Black. I would like this to also be available in dark brown.

Will I buy again: Hell yea! I have been using this for the last 3 weeks now. During the day, during the night.  It looks so natural that a lot of people (including some make up artists) have complimented me on my healthy lashes, and said that I don’t need a mascara at all. (Little do they know.. he, he)..

This thing has pushed my Maybelline Define-A-Lash into a corner. I know that looks all natural and all, but sometimes you just wanna be the queen of glamor. Just don’t go expecting 9 X the volume, which is a complete misnomer. Also it is very reasonably priced at 260/-.