Book of the Fortnight: The Lost Symbol

Cut to October 2008: I am contemplating starting a blog. There are lots of topics swimming around in my head - Psychology, Exploring Mythology, Make Up, or Books and Literature. I was trying to make up my mind.

Cut to today: Well, you guys know very well what got chosen. Make Up.

However that did not mean at any point that I gave up my passion for the other 3. I even started a blog on psycology called "According to Freud" but since I was falling short on time and both blogs were suffereing I gave up one and stuck to the other.


Books still remain a big passion for me. And to give you an idea - there are more books strewn around my place than make up. I am even a member of an online library and an avid reader and read upto 2-3 books every month

I read all kinds of genres. Fiction, Mythology, History, Chick-lit (Bridget Jones - ahh, she is the best) and  SFF (Science Fiction Fantasy) as my favorite (Any Douglas Adams or Terry Pratchet Fans here?). 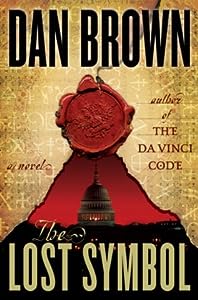 Since I read so many books, as you can tell by now, I am quite opininated I thought I would share my reviews of these books with you. I do realise that all of you may not be fond of reading - my request to those readers is to just indulge these posts - they will just be making an appearance once in a fortnight or so. The blog still is about make-up.

And those of you who do like reading, well, we just found another topic to bond over :-)

My first review is for Dan Brown's The Lost Symbol.

I just got done reading this about 10 days ago. The book released in September 2009 with a lot of media attention thanks to its predecessor  - The Da Vinci Code. (which I loved btw).

A big book at 509 pages, reading this in bed was made more worse by the fact that this was sold only in hard cover. But I was still excited when the library sent the book (finally!) to my place.

I'll try not to give the plot away here. But the story is similar to other Robert Langdon novels. Symbologist find himself embroiled in the middle of a mystery involving a secret society. Sounds similar to Angels & Demons & Da Vinci Code? I don't blame you.

I sat down excitedly waiting for secrets to tumble. And they did. The Lost Symbol is based on The Law of Attraction. (For those of you who have read The Secret - this may ring a bell) The narrative even goes as far as to the world of spirits and demons being invoked in rituals by pagan practitioners, the Freemason rituals and even touches upon a new science - Noetic Physics. It is written in typical Brown style with breathless pace and twists and turns at every stage.

However despite all the above exciting mix of theories I still didn't enjoy it as much as I thought I would. Maybe I had inflated expectations after Da Vinci, But this book doesn't even come close to that. It is long, tends to plod and has little humor or lightness about it. The ending is labourisly long and I almost gave up at the second last chapter. I didn't want to read anymore and just wished that Brown would wrap it up all.

Frankly the book was a little bland.

Would I re-read this: No way. A one time read is more than enough.

Would I recommend this to you: It is a good one time read. Kind of like Time - Pass, it is just ok. But it doesn't come close at all to the Da Vinci Code (which you can tell by now, I just loved and have read it many times over). I didn't even like the ending of Angels & Demons, actually. Even that I felt was very long and could be drastically edited.

Have you read this book? What did you think?