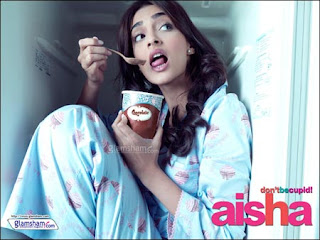 I quite liked the movie (the book is wayyy better though, and frankly so was Alica Silverstone's Clueless - another movie adaptation of the book), but I liked that Bollywood is now experimenting with Chick Flicks and also liked Sonam Kapoor's make up in the movie.

The opening scene has her in a cream lehnga which looks lovely. With that she has used silver and lilac eyeshadow to compliment the dress.

She wears a lovely frosted brown eyeshadow on her eyes for most of the movie, especially in scenes that show her pottering around the house. I felt it was a tad similar to Jordana's Mocha Frost eyeshadow, coupled with black pencil liner on her upper lashes, pink lip cream and  black nail paint.

She also sports red lips, full on smokey eyes and false eyelashes in the party segments and carries them off well.

Of course, the shoes & bags in the movie are awesome.

She was in collaboration with L'oreal for some make up products, but I felt that they were used only in one song segment.

Have you seen the movie? Any products you would recommend to get her look?
Email Post
Labels: aisha how to movies movies and makeup sonam kapoor sonam's look in aisha