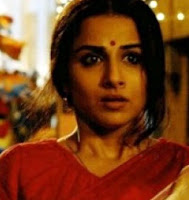 Most of you must have seen Kahaani by now. I’ve seen it twice already. The first time I saw it with friends and honestly didn’t expect it to be so good. (I kept cribbing, "What if she doesn't find her husband? That'll be such a sad ending!!") The second time I went with my family. Tbh, the movie is so good that I didn’t even notice Vidya’s makeup the first time. It was only the second time that I noticed what “Vidya Bagchi” was wearing.

Her styling in this movie, while consistent with her character is also one of her best ever. She looks really good in this movie throughtout. Be it in her Gap Maxi’s paired with inner lacy tee-shirts, or when she wears a sari in the end. I was quite surprised to see a leading movie heroine sport a collared tee-shirt (the exclusive domain of the IT geeks – it is very popular with engineers. I don’t know why) in one of the scenes. She looked so normal, just like any other young woman, chilling before getting ready for the day ahead. I guess I have gotten too used to the Sonam Kapoor’s and Katrina Kaif’s who wouldn’t touch a collared Tee with a barge pole, much less actually wear it in a movie.

Keeping in with the theme of an expecting mother looking for her mate, her makeup in this movie is quite toned down. The shades are mostly earthy and neutral.

Skin: Regular Matt skin. It didn’t seem like she had a lot of highlighting done and blush was minimal, if used. Blush was mostly in brown shades.There is a tiny little bit of contouring around her cheeks & hairline. Maybe to soften up her look. 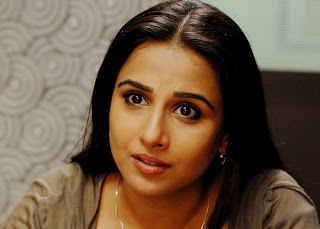 Eyes: Vidya sports a neutral brown eyeshadow all over her lid with just some definition in her crease. She wears thick, little smudgy dark brown eyeliner on her lower lash line but just half way. I think it was done to give her a little bit of that open-eyed, innocent look. Generally using a liner on the bottom lash line all the way to the tear duct tends to close up the eyes. This way this got a bit of smokyiness and intensity but her eyes still seem earnest. The eyebrows have been very well defined and filled in. Mascara is there on the upper lashes, but not to emphasize her fluttery lashes, rather to just open her eyes and make her look innocent – we gotta buy her Bagchi story after all J 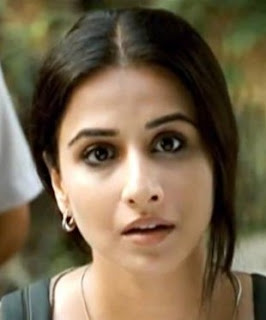 There are certain scenes where it seems that she is without makeup, we can see dark circles under her eyes and her skin looks completely bare – the lips have no color, compared to the other scenes. I’m not sure if she was barefaced, or the circles were re-created using makeup. But I’m pretty sure, none of you want tips on how to do this. (On a side note, if you do want to know how to create dark circles, let me know. I once did them on a friend, who had excused herself from work on due to “illness” She needed to look the part the next day.)

Lips: All peach & pink brown based shades, please stand up. Yes, these are your suspects in this movie. No gloss dear, gloss has no place in a thriller like this.  Use which lipstick is your MLBB in this case. Don’t use a very creamy – texture based lipstick like NYX. We don’t want the texture to show up,  just the color.

What did you think of her look in the movie?
PS: Long time ago I had planned to do a breakup of her look in “The Dirty Picture” too, but I felt no one would be interested, if you are, let me know in the comments. I’ll jot down my thoughts and put up a post on that.

All Images from Google