I have been planning to write this post for the longest time ever! 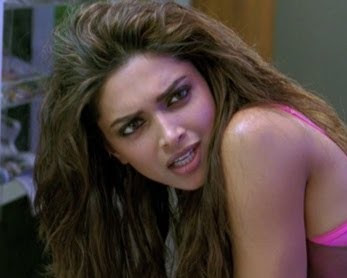 I saw the movie the very weekend it was released, and kept meaning to write this, but first I got a bit busy & then later I got the flu (which I still have a bit of).

When I had the opportunity to meet Deepika a few days ago, she did admit that she has received a lot of good feedback on her makeup in the movie, but she also is aware that she cannot repeat it in her upcoming movies because not only would it look old & boring after a while, but also because it needs to go with the character she is playing.

The movie itself boasts of good performances & very nice locations - it is a visual treat to watch. Between Veronica (Deepika) & Meera (Diana) in the movie, I resonated a lot more with Meera's style in terms of clothing & makeup, as I'm myself very fond of soft English colors, polka dots & ultra feminine cuts & prints. Not that Veronica is not styled well, it is just a personal preference.

The story line is, well, a bit silly. Saif looks too old to be romancing these young girls. I just thought it was a lazy script that doesn't delve deep enough into Meera's insecurities about her looks, Veronica's discomfort with intimacy & feelings and Gautam's irrational love of the chase.

But before I get lost into the unsaid psychological motives of the characters, let's take a look at Ms. Dippy's makeup!


There were 3 distinct looks that Deepika sported in the movie.

This was your regular smoky eyes, lush lashes look. It helps that Deepika has large eyes to carry such a look off. But instead of black, she's wearing brown eyeshadow. Black is used only to line her waterline and upper lash line. The lips are your regular nude type, beige / brown lipstick with a bit of pink applied and blended in the middle of the lower lip to give them a natural look. Eyebrows are filled in with brown. Blush is skin-colored, if used. It is more of a glowy skin look with highlighter. At one point in the movie I did feel that she had some shimmer on her lid in the smoky eye look, but I could not find a still / image for it. To replicate that, just apply a shimmery antique gold shade (like MAC Genuine Treasure Paint Pot) on top of the brown eyeshadow or else just do your smoky eye with L'oreal Infallible Eyeshadow in Endless Chocolat which is a awesome neutral (will go well on both cool & warm toned people) brown eyeshadow with golden shimmer. Hair has mega volume. Don't ask me how to do that. I wish I could buy a wig like that and walk around in it.


I personally found this to be her most interesting look. The eyes are much simpler in some scenes. The crease is defined lightly with a dark brown shade & she is wearing a thick cat liner in black. In other scenes she is wearing a lighter version of her night time smoky with a neutral brown on lid & lotsa kohl & mascara. On her lips, she has a muted matt version of this season's hottest color - maroon! It is a brownish maroon shade - applied lightly as a tint. I think MAC Viva Glam III lipstick as well as Brick O La could be possible options for this. Skin is highlighted to an inch of its existence and the brows are very well defined.

This is her "no-makeup" makeup look. Just some black liner to tightline & mascara. The lid has a neutral matt brown shade. Her blush is a neutral pink brown, may be MAC Mocha and lips also have a similar neutral pinky - brown shade. This is a shade very easily available across brands, in MAC you could try Creme in your Coffee or else in Lakme Absolute try Peach Carnation (this would be my #1 fav lipstick from Lakme's range!). In some scenes her lipstick looks like a even more muted version of the brownish maroon she wears in Look #2, in some it seems she is wearing a light brown shade like MAC Half & Half.

I absolutely loved her golden caramel highlighted hair in the movie - and the volume!! OMG! It is volume that I dream of. I wish my hair would look like her's - a wild lion's mane.

Did you like Dippy's Makeup as Veronica in the movie?
Which is your favorite look from the movie?
Any tips to help re-create it?
Email Post
Labels: bollywood breakdown cat eyeliner cocktail deepika padukone hindi movies how to makeup movies and makeup party makeup