I'll Miss You, Where Ever You Are!

I haven't blogged for over a week now. Somehow I can't get my mind around it. I lost my youngest Mamaji this Friday.

It was totally unexpected, he was in his early 50's. He woke up in the morning on Thursday complaining of uneasiness, and within the hour slipped into unconsciousness. He never woke up from that deep sleep. We later found out that he had suffered a brain hemorrhage. His heart stopped beating on Friday morning. Within a period of 24 hours, he went from a lively, loving, stylish human being to just a memory.

I don't think it has really sunk into me, especially since I could not go to his funeral as my younger brother has his exams.


He used to call me his lucky charm - because he finally got a job the day I was born. This is 1983, when jobs were not so plenty. And he needed the job - he had to impress his childhood sweetheart's dad. So that he would agree to their marriage.

He did go on to marry her. I remember being so excited for his wedding, I was 4 or 5 then, walking & dancing in the baraat, dressing up in a bridal lengha for his reception. It just seems like it was barely any time ago. The picture below is of the newly weds - days after their marriage. 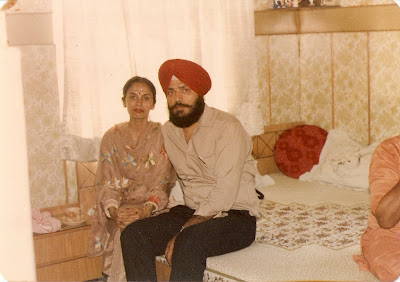 They were blessed with two beautiful kids. They both are very young, barely out of their teens.

It is hard to believe that the next time I go to Jalandhar he won't be there. In some way I'm glad that my last memory of him is of last year, happy & healthy - when I had gone for my cousin's marriage - and not him lying lifeless.

He was such a good natured, wonderful, human being. It somehow seems unfair that someone as wonderful as him, lived for such a short time on earth. I feel like the world is poorer, by having lost him.

I have really run out of words now, there is this feeling inside my throat - like something very intense is bubbling in there. I thought I would feel better by writing (since I'm not a very expressive person with regards to my emotions), but I now feel his loss even more.

But I don't want his memory to just fade away, hence this post. Somehow I feel that my putting down my thoughts here - I may help him stay in my mind a bit longer. I want the world to know, the amazing person that he was.

You were one of a kind, you were a Rockstar!