It started off with the 10 piece french inspired no color wardrobe trend. Minimal. Lived In.

Soon Kanye was onto it, and now it is everywhere. I am talking about holes. Holes in jeans, holes in sweatshirts. It is in H&M now and may be the biggest trend in 2017. It is the distressed clothing trend. I don't include the clothes that have artfully placed cuts in them in this category. You know, the cold shoulders & cut-out tops & dresses. Those look good. They remind me of the grunge look popular in the 90s.

I talk about clothes where the distressing is such that you can't make out if "a moth ate it and it is time to make it into a kitchen cloth" item or if it was "designed to look this way". 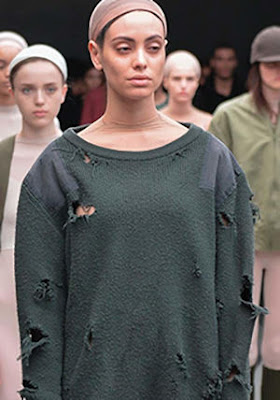 At a very basic level, it is fashion romanticizing the lives of the poor. Look at that sweatshirt, it is from Kanye's show, and other than someone who had the privilege to spend that much money for a piece of a garment like that, who else would have it? A poor person, who can't afford to spend money on clothes, and who has to wear such faded, tattered clothes. Not as a choice though.

The rich will offset the tattered sweatshirt with a face full of makeup, well-groomed hair, an iPhone and a pair of sneakers. For them, the look is ironic. For the poor person, it reflects a choice they made between maybe food & clothing.

I love fashion, I always have. But this trend just feels a bit too much, if you will. The rich have always co-opted trends from various movements of their time. We talk about cultural appropriation as a sign of insensitivity, the acceptance of a trend (generally seen in a minority group) by society at large when adopted by the privileged population. This seems very similar but on an economic privilege scale. If you have seen or experienced poverty you would know that there is nothing endearing about it. Only the rich would want to go slumming because they can opt out of it whenever they want to.

Or maybe it is the recession, which would actually make this a good trend. I no longer have to mend or throw out faded clothes, and buy new ones to replace them. Tatters are in, and its just the fashion industry making sure recession doesnt impact my ability to look in vouge.
Email Post
Labels: 2017 fashion trends distressed clothes fashion trends Recession tattered clothes